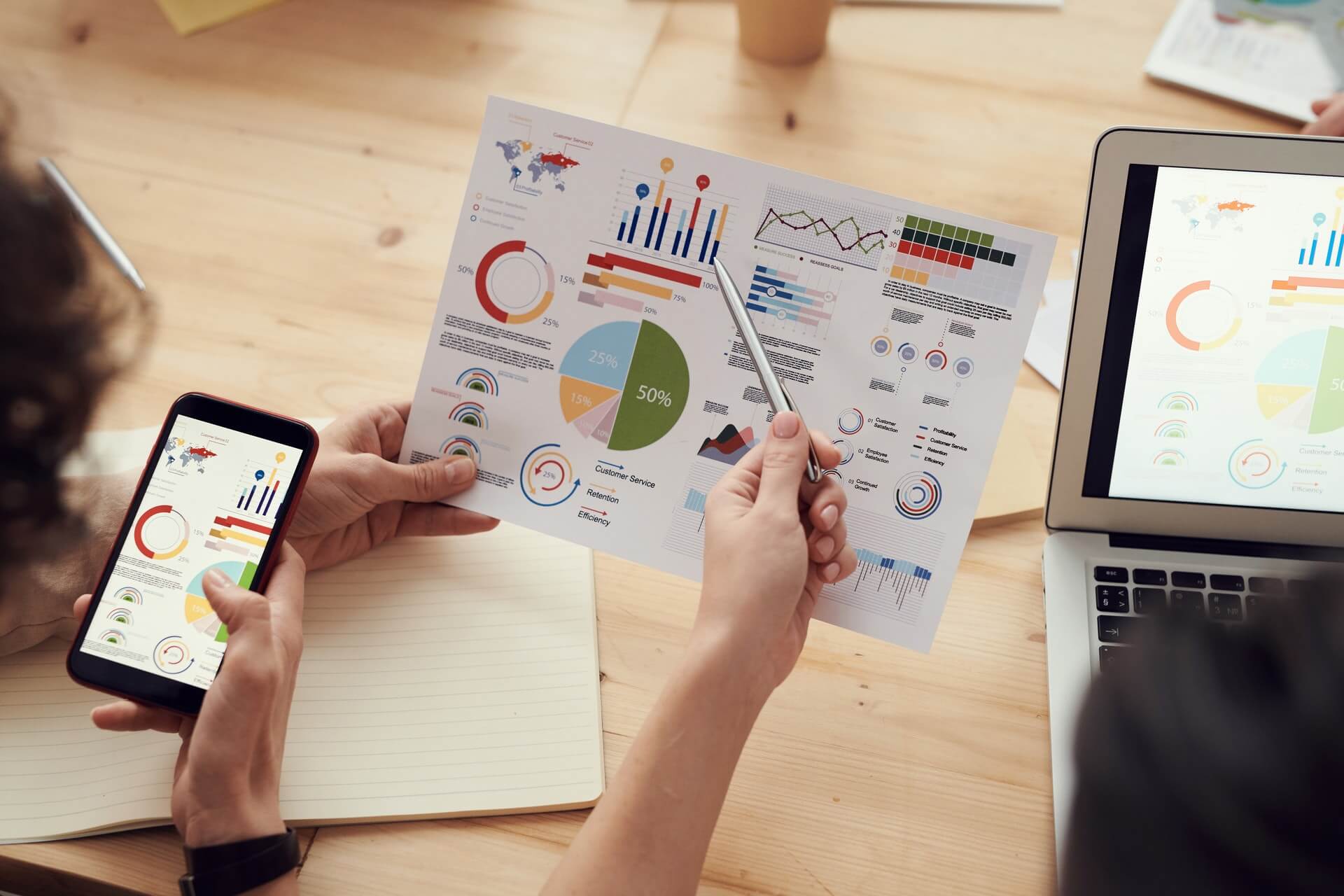 Do you wonder which PowerPoint chart is most suitable for your purpose? There are a variety of chart types, such as Gantt charts, Mekko charts, waterfall charts, area charts, etc. With the right representation, you can support the meaning of your data and communicate it successfully. Here we list the most useful charts and explain what purposes they suit.

Not every PowerPoint chart is suitable for every data set

The challenge: integrate complex, dry figures into the narrative so your audience can follow the story. If you only project unprocessed reports on the wall, you will inevitably lose the reader's interest. Therefore, make sure you use the right chart. Choose a chart that clearly and accurately explains your information.

Ask yourself the following questions: 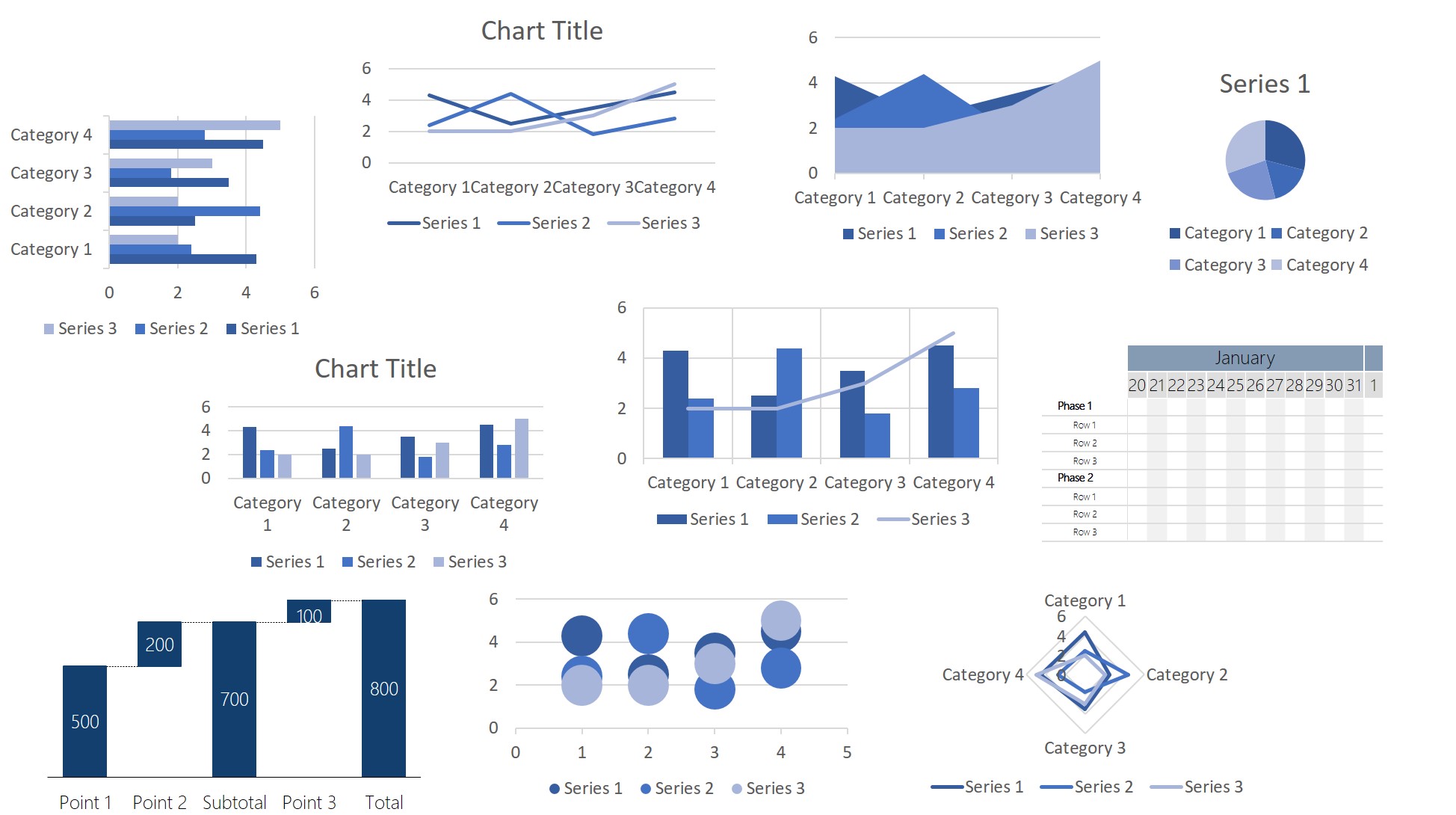 You can find the entire list from Microsoft here.

With a Gantt chart you can clearly display activities and milestones on a timeline - whether for a small project or a multi-year roadmap. You have the option to add lines, tasks, date lines, highlights, delays, and status symbols. Gantt charts are not included in PowerPoint but can be created directly in PowerPoint through empower® charts.

Example: This diagram type is especially suitable for calendar/project planner.

Here is our article: How to create a Gantt chart in just 8 steps.

Manually creating Gantt charts for project plans and timelines in PowerPoint is time-consuming and tedious. With empower® charts you can create your Gantt charts in a few minutes and with a few clicks, automatically. For example, you can show school vacations or structure your tasks in phases and collapse them when needed.

Bar or column charts are suitable for showing fluctuations and trends over a period of time. Size ratios in particular are best compared with bars or columns. Present multiple data series as either stacked or clustered columns/bars. With empower®, you can decide whether to display sum labels, connecting lines, and percentages. If needed, you can insert arrows or breaks to highlight key points in your data.

Bar charts are frequently used in surveys. Percentages and rankings are best visualized with bars/columns.

Example: This diagram type is especially suitable for surveys, evaluations, or statistics.

Here is our article: Learn how to create bar/column charts with breaks in PowerPoint.

Pie charts show proportions of a whole. You can show absolute numbers, percentages, or labels in a pie chart. Time sequences are not suitable for pie charts.

Line charts (also curve charts) present events and values over time. They also illustrate developments and trends. Several graphs can be compared directly with each other. The axis scale can be defined and the lines formatted.

Example: This chart type is suitable for example for stock prices.

With an area chart, you can visually represent relative references of two quantities and how they change over time. This PowerPoint chart is especially good for visualizing operational and strategic gaps.

Example: This chart type is mainly suitable for sales and profit lineup.

In a waterfall diagram, growth factors or possible cost savings can be clearly visualized in step form. Waterfall diagrams are helpful if you want to visualize single steps of an increase or decrease during a process.

Scatter plots are useful when you want to visualize a large amount of data. They help show correlation and distribution analysis to reveal exceptions or outliers. Plot points with two dimensions in a scatter plot or add a third dimension using a bubble plot.

Example: This diagram type is mainly suitable for visualization of a data collection (for instance, speed of a car and braking distance). 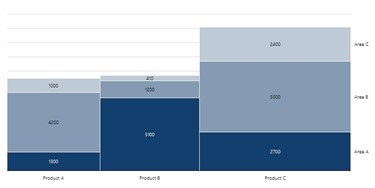 Mekko charts (Marimekko and Column Mekko) are also suitable for displaying a large amount of data. Let’s say you want to show how your company's sales distributed by segment and region in percentage terms. A simple chart would not show the relationship of the regions to each other. For this you need the Mekko chart.

Example: This chart type is mainly suitable for a snapshot of several market segments in a single chart. 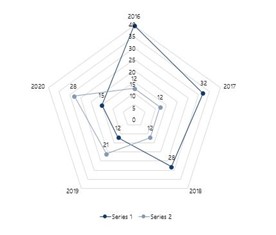 The network diagram (also known as radar diagram) is particularly suitable for displaying the relative strength or expression of predefined criteria. Each criterion has its own axis, the zero point of which lies in the center.

Example: This chart type is especially suitable for comparing two companies or departments based on several criteria. 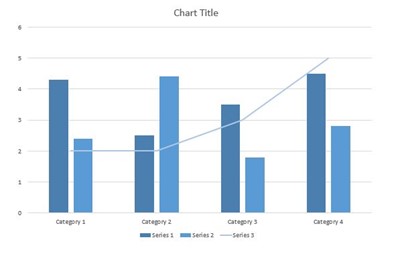 Combined diagrams include two different chart types such as column chart and curve chart. This type of diagram is great for presenting the relationship between two data series with different scales. You can also use two value axes to combine differently scaled data series in one chart.

Example: This chart type is mainly suitable for sales, costs, and profit over time.

This brief overview of useful charts and diagrams should help you improve the expressiveness of your presentations. Using charts in PowerPoint presentations is an obvious choice because of the easy linking of PowerPoint with Excel. A PowerPoint Excel link automatically updates your data in PowerPoint, saving you valuable time.

Think about being efficient and saving time when creating charts. The PowerPoint add-in empower® has already helped companies like BWM and Bayer to become more efficient in creating meaningful charts.

With empower® charts, for example, you can create compelling PowerPoint diagrams in no time at all - not only bar charts and line charts, but also elegant Gantt charts and easy-to-understand waterfall diagrams. The PowerPoint add-in empower® charts facilitates chart creation far beyond standard PowerPoint features.

You can find more information about empower® charts on our website or by contacting us. We can introduce you to empower® charts in an online demo or provide you with a trial version of empower®.

Free icons for your next PowerPoint presentation

Made in Office becomes empower® – be your best at work!